Google will know more about you than your partner

Google has been savaged by critics after revealing plans to link user data across its email, video, social-networking and other services.

In a move denounced by some as a massive invasion of privacy, the changes will piece together information from Gmail to YouTube to the Google Plus social network.

For example, if you spend an hour signed in to a Google account searching the Web for skateboards, the next time you log into YouTube, you might get recommendations for videos featuring Tony Hawk, along with ads for his merchandise and the nearest place to buy them.

However, this could also apply to searches relating to sensitive topics such as meetings in your calendar.

Cecilia Kang, of the Washington Post, described collation of vast tracts of information as a ‘massive cauldron of data.’

‘Privacy advocates say Google’s changes betray users who are not accustomed to having their information shared across different Web sites.’ she said.

‘A user of Gmail, for instance, may send messages about a private meeting with a colleague and may not want the location of that meeting to be thrown into Google’s massive cauldron of data or used for Google’s maps application.’

Technology site Gizmodo said that the change was the end of Google’s ‘don’t be evil motto.

The site’s Mat Honan wrote: ‘It means that things you could do in relative anonymity today, will be explicitly associated with your name, your face, your phone number.

‘If you use Google’s services, you have to agree to this new privacy policy. It is an explicit reversal of its previous policies.’

He wrote: ‘Google will know more about you than your wife does. Everything across your screens will be integrated and tracked.
‘Google noted that it collects information you provide, data from your usage, device information and location. Unique applications are also noted. 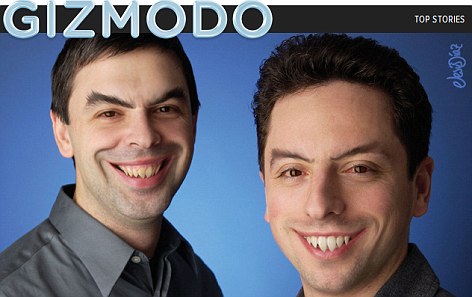 Sites such as Gizmodo were quick to lampoon Google’s founders Sergei Brin and Larry Page and the site’s former slogan, ‘Don’t be evil’ 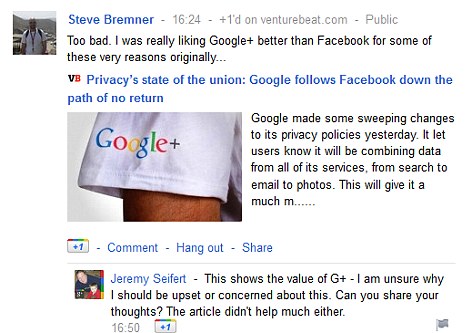 ‘Sure you can use Google’s dashboard and ad manager to cut things out, but this policy feels Big Brother-ish.’

The changes, due on March 1, are a massive overhaul of Google’s privacy policy which the company claims will create a ‘beautifully simple and intuitive’ user experience.

More than 70 different company policies are being streamlined into one main privacy policy and about a dozen others. 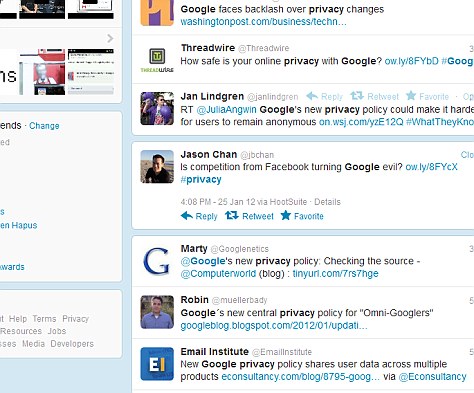 Separate policies will continue to govern products including Google’s Chrome Web browser and its Wallet service for electronic payments.

Google’s last attempt to link information across its services triggered a wave of privacy complaint which helped kill the its Buzz social networking service.

The company hopes to avoid similar legal hurdles with its new policy.

“If you’re signed into Google, we can do things like suggest search queries – or tailor your search results – based on the interests you’ve expressed in Google (Plus), Gmail and YouTube,’ the company says on a new overview page for its privacy policies.

‘We’ll better understand (what) you’re searching for and get you those results faster.’

After the new policy comes into effect, if you’re signed in, you’ll be treated as a single user across all of Google’s products.‘If you’re signed in, we may combine information you’ve provided from one service with information from other services,’ Google’s director of privacy, product and engineering, Alma Whitten wrote in blog post.

‘In short, we’ll treat you as a single user across all our products, which will mean a simpler, more intuitive Google experience.’

Google pointed out that cookies and ‘identifiers’ will not be tagged to sensitive categories, such as those based on race, religion, sexual orientation or health.

It also emphasised that the new privacy policy will not force users to become Google Plus account holders and that it will still be possible to search Google without signing in, or to sign in and then elect to search anonymously.

The changes follow the shutdown of Buzz last month. After its introduction less than two years ago, the social networking tool was ridiculed for exposing users’ most-emailed contacts to other participants by default, inadvertently revealing some users’ ongoing contact with ex-spouses and competitors.

Google has since made Plus the focal point of its challenge to Facebook’s social network.

In the first seven months since its debut, Plus has attracted more than 90 million users, according to Google.

To promote Plus, Google recently began including recommendations about people and companies with Plus accounts in its search results.

That change has provoked an outcry from critics who say Google is abusing its dominance in Internet search to drive more traffic to its own services.

Google and the Federal Trade Commission reached a settlement last year that forbids Google from misrepresenting how it uses personal information and from sharing an individual’s data without prior approval.

Google also agreed to biennial privacy audits for the next two decades.

Google said it talked to regulators about the upcoming privacy changes, which it will apply worldwide. An FTC spokeswoman declined to comment on the changes or say whether the agency was consulted.

Some critics saw Google as trying to beat regulators to the punch by setting a precedent before the FTC unveils its own framework for protecting online privacy. 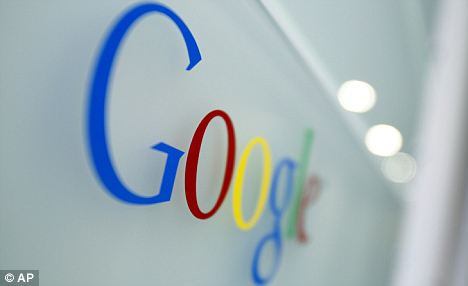 Defence: Google argues that its new policy will give users ‘a more intuitive experience’

Jeff Chester, executive director of the privacy group Center for Digital Democracy, said Google hopes ‘that by creating a one-stop shop for privacy policy it will deflect regulatory action.’

Vivian Reding, the European Commissioner for Justice, welcomed Google’s announcement: ‘Google was quick. Google made the first in the step of more privacy rules. I can only applaud more companies to try to move in the right direction.’

Google, Facebook and other popular Internet services all want to learn as much as possible about their users so they can sell more advertising at higher rates to marketers looking to target people interested in specific products, such as golf clubs or skinny jeans.

Google says users who opt to see personalised ads are 37 percent more likely to respond to an ad than people who opt out of targeting.

Ryan Calo, director for privacy at the Stanford Center for Internet and Society, said Google is trying to make its policy privacy transparent instead of bogging users down with pages of legalese; the new privacy policies run about 10,000 words, down from 68,000.

But he said the company must ensure that the ways it uses data help users without revealing sensitive information.

‘If it creeps people out, then they need to be aware of that,’ he said.