As it’s done with iOS, Google is trying to carve out a place for search and other services on Microsoft’s new operating system.

On Windows today, people reach Google’s search service with a browser. But when Windows 8 arrives this week, the company evidently hopes people will use a dedicated search app, too. 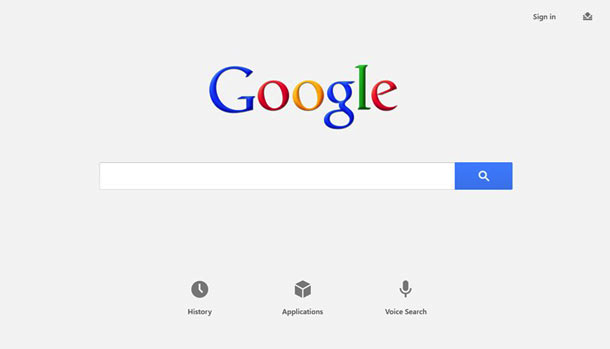 Just as it has done with iOS and BlackBerry OS before, Google released a dedicated search app for Windows 8. It’s available in the Windows 8 store now, Microsoft programmer Mohamed Mansour noticed.

The search app is interesting for a few reasons. First, it indicates Google wants people to use its services directly, which is important since in that circumstance it doesn’t have to share search-ad revenue with whoever otherwise referred thee search queries to Google. Second, it raises the prospects of other Windows apps — Maps, YouTube, Gmail, and Google+ spring to mind as possibilities. Third, it shows that Google wants to provide people with a way to perform lots of actions within an ever-richer Google environment.

The app features not just the regular a search box, but also a mechanism for voice input as well. Like the Web interface to search, the app also can show instant previews — small versions of Web pages that show people what they’d see if they clicked on a link. Unlike the Web version of search, though, the app shows the instant previews as an array of mini Web pages side by side on a black background. Image search results are shown in a similar fashion, and the app is touch-enabled for the Windows 8 “touch-first” era.

“So far it looks beautiful,” Mansour said, but I couldn’t judge for myself since it’s evidently not universally available yet.

Google’s Windows 8 app offers access to many other Google services besides search.(Credit: Microsoft )

Microsoft will launch Windows 8 on Friday, October 26. The new operating system is a bold but potentially confusing rework of Windows. Its single biggest difference is a very different user interface for which programmers must write new versions of their software. Microsoft may not be happy to see people using Google over its own Bing search services, but it is good for the company that Google helping flesh out what today is a relatively skeletal range of software options for Windows 8.

The search app stands alone but also can be wired into Windows 8’s Charms technology for providing system-wide services, according to its description.

And the app serves as a hub to reach other Google services such as Google Docs, Gmail, Google Maps, Google Voice, Google+, Google Drive, and YouTube, the description said.

Although it’s a Metro app, Google said it only works on the Windows 8 running on x86 chips, not on Windows RT, which runs on ARM processors. Windows today is found solely on x86 chips from Intel or AMD, but with products like the ARM-based Microsoft Surface tablet with a detachable keyboard, Microsoft hopes to penetrate the more mobile market dominated today by Apple’s iPad.

One big difference from Google’s perspective about the two Windows versions is that the Windows RT version only can run Microsoft’s Internet Explorer browser engine with full privileges; other browsers such as Google’s Chrome are permitted only in a way that significantly reduces performance and security features such as just-in-time compilation of JavaScript software and compartmentalization of different computing processes, respectively.

The Google app for Windows 8 features instant previews of search results in an array that people can swipe around to browse.(Credit: Microsoft )
Share this
0 likes
Related Articles
0 Comments