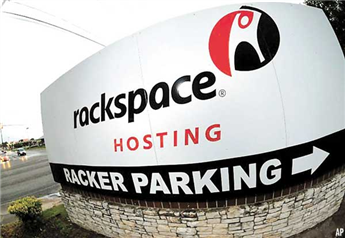 “Shares of data center and hosting stocks are under pressure today,” wrote Todd Weller, a Stifel Nicolaus analyst, in a research report Tuesday. “We believe the key driver of the weakness likely relates to the announcement of the general availability of Google’s Compute Engine public cloud service nearly 18 months after it was initially announced.

“We believe the pressure relates to concerns around increasing competition in the public cloud space, with Google’s effort joining the ranks of other large tech companies that are stepping up their efforts to compete with market leader Amazon Web Services, (as well as) IBM (IBM) (acquisition of SoftLayer), Microsoft (MSFT) with its Azure offering, and VMware (VMW), to name a few.”

Amazon Web Services has become a growth engine for the e-commerce giant, whose CEO Jeff Bezos on Sunday discussed its cloud plans as well as a road map to drone product delivery in a “60 Minutes” interview.

AWS competes with Rackspace, IBM, Microsoft, Hewlett-Packard (HPQ) and others in infrastructure-as-a-service, or IaaS, a low-profit-margin business in which enterprise customers rent computers and data storage via the Internet.

AWS’ growth has raised worries over slowing information technology sales, because cloud computing customers might buy less hardware and software for their own data centers, as IBD has reported.

Barclays, in its 2014 global technology outlook, said greater corporate use of cloud-computing services will drag down revenue growth for IT companies.