Google breaks its own rules

Google has been caught breaking its own rules by paying bloggers to write posts promoting its Chrome web browser.

The posts, which seem to contain very vague praise of Chrome with little original content, have helped the browser gain in popularity in Google’s PageRank technology, which determines which sites come at the top of search results.

Google said that it has not authorised the controversial marketing campaign, and claimed that the company had ‘consistently avoided paid sponsorships’.

‘Don’t be evil’: But the tech giant has been found using shady marketing

The offending posts came in the form of blog entries talking about the benefits of Google Chrome, especially for small businesses.

Many of these posts talked in a general way about the benefits of doing business online, and ended with a video from Google’s latest advertising campaign.

The sponsored messages all ended by saying ‘This post is sponsored by Google Chrome.’

They could also be identified by the phrase ‘Google Chrome helped this small business in Vermont go global. What can Google Chrome do for your future?’, which appears in a large number of the paid posts.

Some of the posts appeared high up in the Google search result for phrases such as ‘google chrome benefits’, raising concerns that web users seeking to compare browsers could be misled by the subtle advertising.

Many of the suspicious links first highlighted by blog Search Engine Land have now been removed. 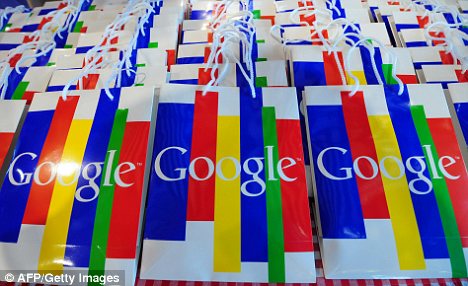 Denial: The company says it did not authorise the campaign

The campaign is particularly ironic, as Google has been strict on punishing websites which seem to exist only to provide advertising rather than original content, often going as far as to exclude them from search results – even when the perpetrator is a Google-owned company.

Another controversial aspect of the campaign is that the blog posts link to Google Chrome’s website but are not classified as ‘nofollow’ links, an attribute which would ensure that they are not counted in search results.

The practice of marking paid-for links as ‘nofollow’ was originally suggested by Google itself.

Google issued a statement claiming that it was not directly responsible for the sponsored posts and blaming advertising agencies it had hired for other purposes.

The company said: ‘Google never agreed to anything more than online ads.

‘We have consistently avoided paid sponsorships, including paying bloggers to promote our products, because these kind of promotions are not transparent or in the best interests of users.

‘We’re now looking at what changes we need to make to ensure that this never happens again.’

One agency publicly apologised to Google for running the unauthorised and ‘poor quality’ campaign, but another company thought to have been responsible for some posts denied its involvement.

Chrome, the web browser launched in 2008, is expected to become the world’s most popular browser by the end of 2012, it was reported yesterday.