Cloud hosting has been gaining more and more popularity in the last years, and it’s basically one of the basic utilities each of us has on his/her desktop. In the past, we used to store our data on various CDs/DVDs, then we moved to external HDDs and now as the era of cloud has reached us, we adapt to new technologies and continue to use it. In this article we have featured seven cloud-based hosting services that would keep your files secure without any hassles and troubles. 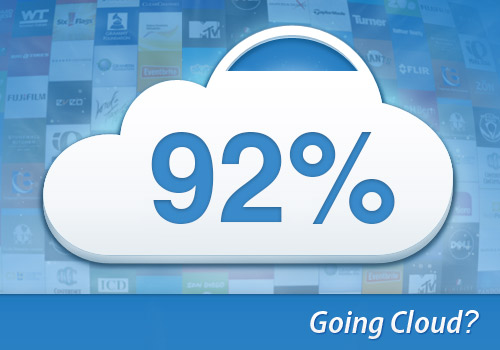 Most of them offer you free space so if you are not sure whether it’s worth moving to such services or it isn’t, then giving them a try will cost you nothing and if you will like them, you can always sign up for a plan that fits you or be rewarded with free space if you invite your friends.

Dropbox is the most famous cloud hosting for your files, and has been one of the first services that appeared on the market. It is a free service that allows you to host all your files like pictures, documents, videos or any other kind of files, securely, in the cloud. It is also very easy to use: you download an installation file which creates a “cloud” folder on your local computer which then syncs with their server, that way you’ll never have to worry about the safety of your files.

The creators have gone beyond and made it available for all major operating systems like Windows, Mac and Linux. They also offer support for mobile phones, being available for the iPhone, Android and Windows 8 powered phones. You can get the application for free and get even more free space when you invite your friends, but keep in mind that you do not get unlimited space, so you’ll either have to limit yourself to the free space given or pay monthly for a package of your choice.

Google Drive has been introduced in 2012 by Google as an alternative for Dropbox and other cloud-hosting services for your files. Google Drive has been integrated with Google Docs for more & better performance. There have been rumors about possible release of “Google Drive” as early as March 2006, but apparently Google have decided to take this step recently.

Google Drive provides you with 5GB of free space, additional storage being able to purchase for a small fee, $2.49 for 25GB up to 16TB of spaces. That’s something that their competitors can’t beat, and it’s something that puts Google above others. They don’t reward their users with extra space for referrals instead they do increase your Gmail and Picasa space up to 25GB when you upgrade your plan.

Box has been released earlier than Google Drive but nobody can say that it is not a decent competitor for the previously mentioned services. Box makes sharing and protecting your files easy, simple and secure from anywhere. They claim to have over 140.000 and 92% of “Fortune 500” businesses use their services, and we have to admit that those are very impressive numbers. Am not sure that anyone can say that they have that many businesses in their “portfolio”, including O2 Media and Pandora.

They also claim to have one of the most secure cloud hosting, owning the security leadership “in the cloud”. They guarantee an uptime of 99.9% and a high-grade SSL encryption on transit which means that your files will be very well protected and in safe. As other service, Box also supports cross-platforms including mobile phones.

Microsoft SkyDrive is another service that allows cloud file hosting and has been initially released by Microsoft in 2007. It hasn’t gained much popularity but it has been integrated with the services of Windows Live, allowing to keep your files private or share them with your contacts (something that their competitors haven’t done yet). There are also publicly shared files that do not require a Microsoft account to access.

They offer 7GB of free space for their new users and additional space can be purchased. There have also been offers that allowed people who sign up to claim up to 25GB of free space, but now that is not available. The application is available for Microsoft Windows and OS X only.

Jolicloud is a different service compared to the rest we have featured today, but it shares the same common feature: allowing people to access their files hosted online, from computers or mobiles. Jolicloud is sort of an operating system that transforms the way people use low cost computers today. Their vision is to combine infinite power of the cloud with the most simple and elegant user interface possible, then deliver it to their users.

Jolicloud is currently available for free, without any pricing plans and ways of extending Jolicloud’s possibilities. They have made it possible to share the files you store on cloud to be accessed from your JoliOS machine, HTML5 interface or any other kind of operating systems including: iOS, Andriod, Windows 8 and Chrome OS.

Mozy is another cloud hosting service that can be added to our list and it is no big difference than Dropbox or Box. Mozy mainly focuses on businesses trying to assure you that your important server databases and business files will be secured and backed up safely and easily accessible. Their main features include but are not limited to: fast servers which have an improved file scanning and incremental backups, secure connections that guarantee a powerful file encryption and protection.

Another feature Mozy has is their support, they want and will assist you in various ways if you run in troubles, including but not limited to live chat, phone support or the classic e-mail assist.

Ubuntu One is the last cloud hosting service we are featuring today. It was created and supported by the guys at Ubuntu and its aim was to provide a sustainable revenue for Ubuntu itself. The service claims to be a personal cloud that brings your digital life together so you can enjoy your content anywhere you are. Even if it is named “Ubuntu One”, they offer support for various devices and platforms including: Windows, Mac, Ubuntu, Android and iOS. You start for free with 5GBs of space and if you need more you will be given the possibility to pay $2.99/mo for each 20GB extra.