Cisco Systems’s third annual Global Cloud Index forecasts that global cloud traffic will more than quadruple, from 1.2 zettabytes in 2012 to 5.3 ZB in 2017. That works out to about 443 exabytes a month, or about 476 billion GB. 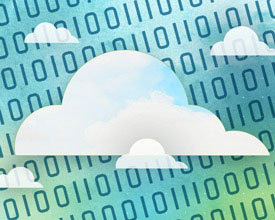 More than three-fourths of that data will originate in the data center, “largely generated by storage, production and development data in a virtualized environment” and “used in activities that are virtually invisible to individuals,” the report says. An additional 7 percent, “primarily driven by data replication and software-system updates,” will flow between data centers. The remaining 17 percent of this traffic will come from end users’ multimedia and project-oriented cloud services.

Cloud Traffic to Come From Users, Not Enterprise Databases

“Digital interactions are becoming essential for all kinds of business and social activities, and customer expectations have changed,” Dada says. As users consume rich media on their own terms – watching video on mobile devices over wireless 4G networks, for example – bandwidth requirements change. “Companies are realizing it’s more efficient and more cost effective to allow a specialist hosting/cloud service provider to run their high-bandwidth, complex, global Web properties than trying to figure things out on their own.”

Krishna Subramanian, product marketing vice president for the Cloud Platforms Group at Citrix Systems, agrees. “We’re seeing organizations shift more of their workloads to the cloud architecture in order to support the accelerating user demand for mobile anytime-anywhere access businesses,” she says. “While cloud adoption initially began with greenfield cloud-native workloads, there is a growing demand from businesses to orchestrate both cloud-native and traditional enterprise workloads in cloud-based data centers.”

Forrester principal analyst Dave Bartoletti says this means enterprises will have to rethink how they manage the growing cloud and Internet of Things. His colleague, Andre Kindness, says keeping files synchronized across multiple personal and enterprise devices will be one of the “things” that challenges companies in coming years.

As the consumerization of IT drives employees to bring personal smartphones and tablets to work, the need to synchronize files is growing “from a whisper to a scream,” Kindness says, noting that 21 percent of global information workers use file-sync solutions. With the number of tablets in use globally poised to reach 905 million by 2017, “the scream will grow louder.”

Managing Data, Cloud Traffic Will Be Difficult for IT Departments

Such growth will be exponential, Miller says – to the tune of 40 ZB by 2020, according to projections from IDC – as the cloud, big data, and other technologies take further hold within the enterprise.

The challenge for CIOs will be managing these unprecedented volumes of traffic and data without breaking existing infrastructure, Miller says. If organizations continue with the traditional silos or hardware-defined data centers, they won’t be able to efficiently scale.

Cloud virtualization may be ideal for these use cases, says Ben Uretsky, co-founder and CEO of cloud hosting provider Digital Ocean. It’s already happening in emerging markets such as Asia, he says, “where there’s a tradition of staying at the cusp of the technological curve.”

This is in line with the Cisco report, which mentions that the Middle East and Africa will have the highest compounded annual growth rate of cloud traffic (57 percent), followed by Asia Pacific (43 percent) and Central and Eastern Europe (36 percent). As public clouds becoming more readily available in these regions, developers are bringing their applications to the Web and building them on top of cloud platforms, Uretsky says.

As infrastructure is virtualized, regardless of locale, developers take on a more operational role. “Not only do they control the code and applications, they control the infrastructure underneath, which mandates the integration of software developers and information technology,” he says. “It won’t be long before future IT departments revolve around developers, increasing the already rapid rate of innovation in cloud technology.”

Cloud computing offers a flexible solution to the limitations of shared hosting and the high expense of dedicated servers, according to Uretsky. The principles are similar to shared hosting, but hardware is virtualized and managed by a hypervisor that can administer servers – as well as create partitions of CPU, memory, storage and network. Meanwhile, since each customer gets his or her own virtual server instance, and since there’s no competition for resources among users, it appears as if each user has a dedicated server.

As Miller sees it, “organizations must turn to open, ecosystem-driven, software-defined networking or the software-defined data center” to manage the growing pool of resources needed to manage data. “Only this approach will fully automate the data center, enabling simpler and more streamlined environments to handle workloads of the future.”