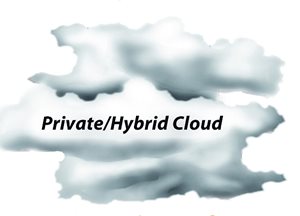 By moving to a cloud-based environment, SCADA providers and users can significantly reduce costs, achieve greater reliability, and enhance functionality.

In addition to eliminating the expenses and problems related to the hardware layer of IT infrastructure, cloud-based SCADA enables users to view data on devices like smartphones and tablet computers, and also through SMS text messages and e-mail.

It may be managed by the customer or by a third party; it may exist on premise or off premise. Hybrid clouds consist of private and public clouds that remain unique entities but are bound together by standardized or proprietary technology that enables data and application portability.

The first method is by far the most common and is illustrated in Figure 1. The control functions of the SCADA application are entirely isolated to the control network.

However, the SCADA application is connected to a service in the cloud that provides visualization, reporting, and access to remote users. These applications are commonly implemented using public cloud infrastructures.

The implementation illustrated in Figure 2 is common to distributed SCADA applications where a single, local SCADA deployment is not practical.

The controllers are connected via WAN links to the SCADA application running entirely in the cloud. These applications are commonly implemented using private or hybrid cloud architectures.

An IaaS such as Amazon Web Services is the most mature and widespread service model. IaaS enables service provider customers to deploy and run off-the-shelf SCADA software as they would on their own IT infrastructure. IaaS provides on-demand provisioning of virtual servers, storage, networks, and other fundamental computing resources.

Users only pay for capacity used, and can bring additional capacity online as necessary. Consumers don’t manage or control the underlying cloud infrastructure but maintain control over operating systems, storage, deployed applications, and select networking components such as host firewalls.

Figure 1: A public cloud formation in which the SCADA system is running onsite and delivers data via the cloud.

PaaS, like Microsoft’s Azure or Google Apps, is a set of software and product development tools hosted on the provider’s infrastructure. Developers use these tools to create applications over the Internet.

Users don’t manage or control the underlying cloud infrastructure but have control over the deployed applications and application hosting environment configurations. PaaS is used by consumers who develop their own SCADA software and want a common off-the-shelf development and runtime platform.

SaaS, like web-based e-mail, affords consumers the capability to use a provider’s applications running on a cloud infrastructure from various client devices through a thin client interface like a web browser. Consumers don’t manage or control the underlying cloud infrastructure but instead simply pay a fee for use of the application.

SCADA vendors have been slow to adopt the SaaS service model for their core applications. This may change as the uncertainty of cloud computing begins to clear. For now, vendors are beginning to release only certain SCADA application components and functions as SaaS, such as visualization and historical reporting.

With all three service models, scalability is dynamic and inexpensive because it doesn’t involve the purchase, deployment, and configuration of new servers and software. If more computing power or data storage is needed, users simply pay on an as-needed basis.

Companies don’t have to purchase redundant hardware and software licenses or create disaster recovery sites they may never use. Instead they can provision new resources on demand when and if they need them. Add in the costs that a company would otherwise incur to manage an IT infrastructure, and the savings of moving to the cloud could be huge.

Instead of numerous servers and backups in different geographic locations, the cloud offers its own redundancy. On-demand resource capacity can be used for better resilience when facing increased service demands or distributed denial of service attacks, and for quicker recovery from serious incidents.

Figure 2: A private/hybrid cloud in which the controllers are connected via WAN links to the SCADA application running entirely in the cloud.

Building an IT infrastructure is usually a long-term commitment. Systems can take months to purchase, install, configure, and test. Equivalent cloud resources can be running in as little as a few minutes, and on-demand resources allow for trial-and-error testing.

On-site IT projects involve significant cost, resources, and long timelines—and thus include significant risk of failure. Cloud computing deployments can be completed in a few hours with little or no financial and resource commitments, and therefore are much less risky.

If a company chooses to implement its own IT infrastructure, access to user data in this infrastructure generally depends on the company’s single Internet provider. If that provider experiences an outage, then users don’t have remote access to the SCADA application.

Cloud computing providers have multiple, redundant Internet connections. If users have Internet access, they have access to the SCADA application.

The backup and recovery policies and procedures of a cloud service may be superior to those of a single company’s IT infrastructure, and if copies are maintained in diverse geographic locations as with most cloud providers, may be more robust.

Data maintained within a cloud is easily accessible, faster to restore, and often more reliable. Updates and patches are distributed in real time without any user intervention. This saves time and improves system safety by enabling patches to be implemented very quickly.

Cloud computing has many advantages over the traditional IT model. However, some concerns exist in regard to security and other issues. Data stored in the cloud typically resides in a shared environment.

Migrating to a public cloud requires a transfer of control to the cloud provider of information as well as system components that were previously under the organization’s direct control. Organizations moving sensitive data into the cloud must therefore determine how these data are to be controlled and kept secure.

Applications and data may face increased risk from network threats that were previously defended against at the perimeter of the organization’s intranet, and from new threats that target exposed interfaces.

Access to organizational data and resources could be exposed inadvertently to other subscribers through a configuration or software error. An attacker could also pose as a subscriber to exploit vulnerabilities from within the cloud environment to gain unauthorized access. Botnets have also been used to launch denial of service attacks against cloud infrastructure providers.

Having to share an infrastructure with unknown outside parties can be a major drawback for some applications, and requires a high level of assurance for the strength of the security mechanisms used for logical separation.

Because the cloud provider controls the data to some extent in many implementations, particularly SaaS, it can exert leverage over customers if it chooses to do so.

As with any new technology, these issues must be addressed. But if the correct service model (IaaS, PaaS, or SaaS) and the right provider are selected, the payback can far outweigh the risks and challenges. The cloud’s implementation speed and ability to scale up or down quickly means businesses can react much faster to changing requirements.

Vipond Controls in Calgary provides control system and SCADA solutions to the oil and gas industry, including Bellatrix Exploration. To keep up with customer demand for faster remote data access, Vipond developed iSCADA as a service to deliver a high-performance SCADA experience for each client.

One of the greatest challenges in developing iSCADA was the state of the Internet itself as protocols and web browsers weren’t designed for real-time data and control.

Many systems relied only on web-based technologies to deliver real-time data. Because the HTTP protocol was never designed for real-time control, these systems were always lacking and frustrating to use whenever an operator wanted to change a setpoint or view a process trend.

Users were asking for an Internet-based SCADA system with a local HMI look and feel, and that became the goal of Vipond Controls. This goal was reached with iSCADA as a service by giving each customer an individual virtual machine within Vipond’s server cloud.

All data is now kept safe and independent of other machines running in the cloud. A hypervisor allows multiple operating systems or guests to run concurrently on a host computer, and to manage the execution of the guest operating systems.

The hypervisors are highly available and portable, so in the event of a server failure, the virtual machine can be restarted on another hypervisor within minutes.

All the SCADA software runs within the virtual machine, and users are offered a high degree of personal customisation. Customers can connect directly to on-site controllers, and Vipond can also make changes to controllers and troubleshoot process problems.

This cloud-based SCADA solution can reduce end-user costs up to 90% over a traditional SCADA system, thanks to the provision of a third-party managed service and the reduction of investment required for IT and SCADA integration, development, hardware, and software.