Cloud Computing: Back to the Future

We may as well admit it, cloud computing has been changing our lives for some time now. When was the last time you didn’t save something to iCloud, Dropbox, Google Drive or Box? Most, if not all of your information lives somewhere in the ether. Hard drives may come and go, but thanks to the cloud, your life can go on, practically unscathed. 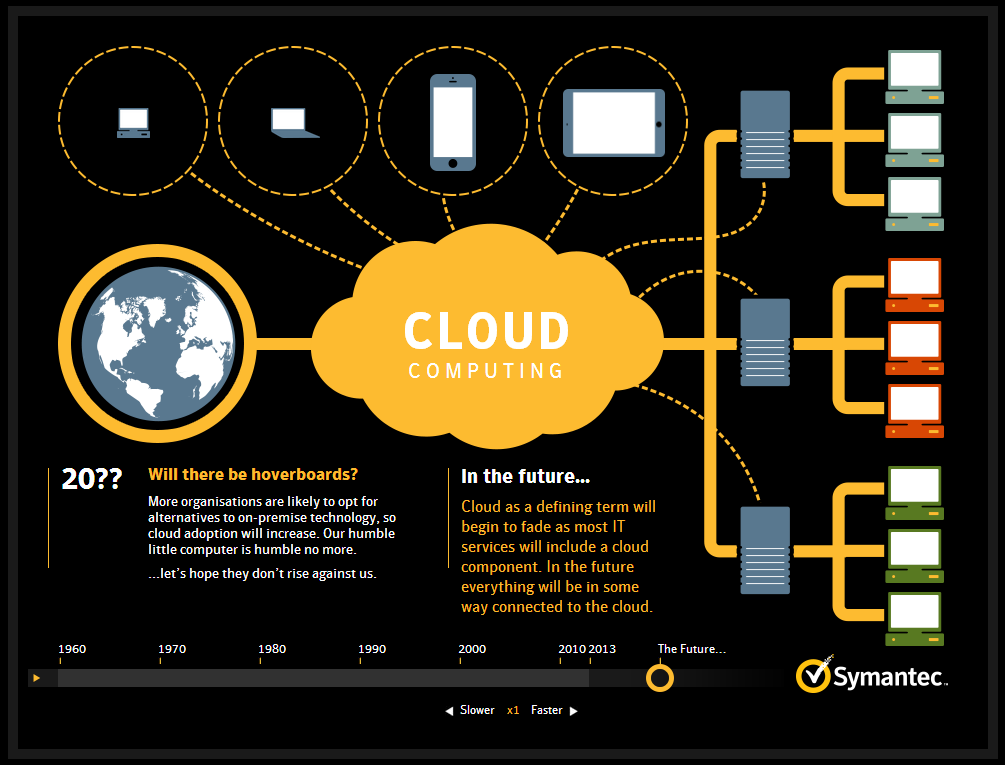 However, if you’re thinking that the cloud is a relatively new phenomenon, think again. Recently, Symantec released an interactive timeline that illustrates the history of cloud computing — highlighting just how far we’ve come.

Since the 1950s, academics and large companies were able to interact concurrently with a single computer. The practice, known as time-sharing, dramatically lowered the cost of providing computing capability, making it possible for individuals and organizations to use a computer without owning one, and promoted the interactive use of computers and the development of new interactive applications.

In the 1960s, John McCarthy, otherwise known as the father of artificial intelligence, introduced the idea of “computation being delivered as a public utility.” His vision of a global network and a utilities-based business model became two of the driving principles behind cloud computing and Internet access in general.

By the end of the sixties, J.C.R. Licklider introduced the idea of an “intergalactic computer network” and was responsible for enabling the development of ARPANET (Advanced Research Projects Agency Network) — what is now known as DARPA. To this day, cloud computing has been a rapidly emerging trend within both the commercial sector and the US Department of Defense.

In 2011, DARPA announced Mission-oriented Resilient Clouds (MRC), an initiative aimed at developing resilient cloud services that would continue to operate and support military objectives despite being hit by a cyberattack.

Throughout the seventies and into the eighties, we saw the proliferation of network technologies, from Compuserve, IBM, Sun Microsystems and Oracle. By the early 1990s, more things became connected thanks to a little thing called the World Wide Web. In 1997, professor Ramnath Chellappa used the term “cloud computing”, defining it as “a computing paradigm where the boundaries of computing will be determined rationale rather than technical limits.” Two years later, Salesforce.com became the first site to deliver applications and software over the Internet.

Once we entered the new millennium, Amazon was quick to introduce with “Web Services” (AWS), which provided an advanced system of cloud services from storage to computation. In 2006, Amazon introduced the Elastic Compute cloud (EC2) as a commercial web service, which let small companies rent computers on which they could run their own computer applications. By 2007, Salesforce.com expanded its efforts with Force.com and from there is was all down hill to the plethora of cloud services at our disposal.

Forecasting the Future of Cloud Computing

The Symantec interactive does more than just help us remember the roots of cloud computing, it provides us with an opportunity to look ahead. Symantec, after all, announced its vision for safe, agile and efficient clouds. In November it outlined a strategy to get there, which includes providing companies of all sizes with a variety of cloud solutions to address their specific needs and current IT environments.

To meet these needs, and to continue to evolve alongside changing technologies, business must look to cloud computing not as a means to an end, but rather as an enabler of change. The future of cloud computing will require new skills, and will set new expectations of security, availability and control. The sooner we accept this, the sooner we can prepare the enterprise for a new era of cloud computing.