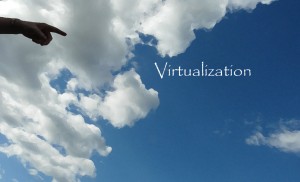 What makes cloud computing itself is not the hardware technology or the infrastructure, what makes it cloud computing is the way that services and functions are being handled and delivered. In essence what cloud computing means is that everything is being done by a server that is located somewhere that you and I should really not concern ourselves anymore, it’s somewhere out there, “in the clouds”. Behind all the services and applications that are labeled as “cloud” are servers, lots and lots of servers where all the processing elements are, the CPU, RAM, GPU, and even the storage devices. However, a server is only really able to dedicate itself to one task, application, or function and serve that over a local network or typically via the internet. This is very limiting for cloud computing as you would need a lot of servers for multiple applications, taking up space, producing heat, and soaking up electricity like sponges. The answer to this is the whole point of the article, server virtualization.

The problem is that a server can only serve one purpose so you would need more of them. So as I mentioned, the answer is server virtualization, the creation of multiple “virtual” servers via software and using only one or few real server hardware to do it. A powerful server can create hundreds of virtual servers with each having its own hardware specification like CPU speed, RAM size, and storage capacity. And each one of these virtual servers can be put to a single use, providing they do not all require vast amounts of computing power. This means that we are able to host multiple applications and services on a single or small group of physical servers, a very efficient use of hardware resource.

Virtualization is very important for cloud computing and as a result brings another benefit that cloud computing is famous for, scalability. Because each virtual server is allocated only enough computing power and storage capacity that the client needs, more virtual servers can be created. But if the needs grow, more power and capacity can be allocated to that server, or lowered if needed. And because clients only pay for how much computing power and capacity they are using, this can be very affordable for most clients.

Without virtualization, cloud computing as we know it would not exist or would be in a different form. But such is now only in the realm of speculation as virtualization is really here to make Information Technology more affordable for the world.