Chromebook Pixel: Work and School Computing In The Cloud

I’ve been using Chrome OS since the Chromium project was in beta, when I tested out the CR-48 for the Chromebook pilot testing program. This time, I took about two months to completely road test the Chromebook Pixel, Google’s latest hardware for Chrome OS. I tested the ‘cloud laptop’, with the help of my son in two natural computing environments: work and school. 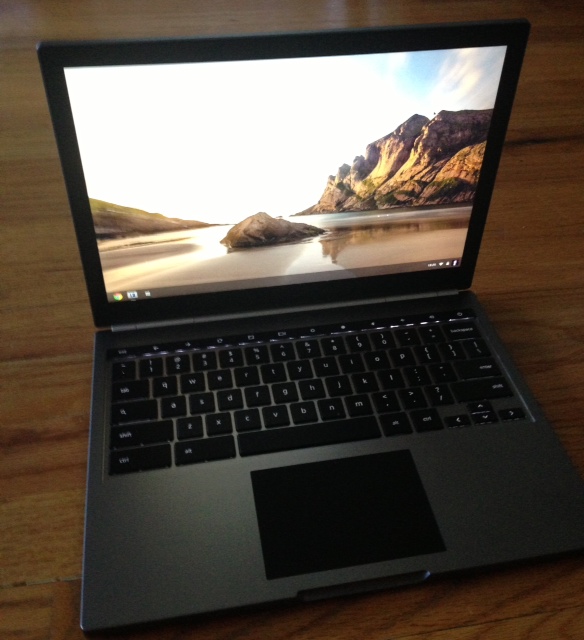 For this review, my testing focused on what you can do on the Chromebook Pixel, using apps on Chrome OS to complete everyday computing (and not so everyday development) tasks. During two months of testing, I used the Chromebook Pixel for my writing work, and my son used the unit for his school work.

Hardware Features
The review unit I tested was the version with LTE capability. Out of the gate you have a 64 GB solid state drive. One of the issues pointed to with Chrome OS is that you have no control over your local data, because you are using a “glorified browser,” but this is not the case. Although the whole proposition of Chrome OS points away from local storage, the immediate plus for the user is that you have plenty of local storage for your data: 32 GB and double that on the LTE model. That’s most likely enough data for a desktop worth of downloads. Yes, there is a “Downloads” folder, and there’s is even a shortcut you can use to access it. The route to system internals is plugging in chrome://chrome-urls/ in the address bar, which will bring up shortcuts for accessing everything from bookmarks to DNS logs or disabling a Java plugin  (the Chrome URL shortcuts also work on PCs running the Chrome browser).

The easiest thing to savor is the bright screen, one 2560 x 1700 resolution at 239 PPI. It’s the 4.2 million pixels crunched  in a 12.8 inch spread of colors that is impressive, one that catches and holds your eye with crisp, intense images. Even after two to three hours of work, the clarity of the colors tends to not tire your eyes. There’s been some brouhaha over the 3:2 aspect ratio, that videos don’t look good. I couldn’t disagree more. Dan Nosowitz at the PopSci blog makes the excellent point that until 2009, “personal displays” were more square, with around 4:3 aspect ratios. The only reason that laptops got stuck with the familiar 16:9 aspect ratio was that the hardware industry simply mimicked digital video’s standardization of the 16:9 aspect ratio on DVDs, HDTVs, streaming video and Blu-ray, followed like lemmings by smartphones and tablets. He wants to get rid of 16:9 on laptops altogether. I agree — 16:9 doesn’t make sense for computing on a screen that most of us (except for our kids living in YouTube) do our work on in WordPress, Google Docs, SkyDrive or ShiftEdit.

The glass screen is touch-enabled, and allows full touch control of touch-enabled web content via touching, pinching and expanding windows and images with your fingers. You control your windows on the screen with resizing, moving or closing them with your fingers. Sadly, the lack of touch-enabled websites somewhat limits the Pixel’s usefulness as a touchscreen device. Curiously, you can’t touch and drag tabs to reorder them (see the touchpad comments below).

One feature that I appreciate is the responsive backlit keyboard, with sensors that attenuate the level of backlighting along with the intensity of the lighting of your environment. To test this out, I simply worked in a darkish room with one lamp, then switched to working in full darkness with only the television on in the background. The keyboard moderated the backlighting level just enough, making it easy to work, even with others viewing television in the same room.

I’m fussy about keyboards, and prefer mechanical keyboards as a rule. The Pixel’s keyboard is chiclet-style. It has the most responsive touch of any keyboard I’ve used — identical touch “mechanic” of your fingers on the MacBook keyboard, a nice snapping down movement of the keys. Enter, center keyboard, one of the advantages of Google Sync, syncing your data, setting, applications and extensions. When I signed into the Pixel for the first time, not just my bookmarks and extensions were imported. I had reassigned the default search key back to it’s classic place as the Caps Lock in my CR-48 testing period, and Google Sync’s settings had retained that particular key assignment.

The touchpad is made of etched-glass, easily clickable to select images, documents, close windows, etc. The R-click functionality of clicking the right on the CR-48 touchpad is gone, sadly. I found that it was an easy alternative to the some laptops’ R-click button. But, the clickable touchpad works briskly with pressing Alt + click to enable R-click functionality. The Pixel’s “tap-to-click” setting (which I used on the CR-48) is inexplicably buried in Advanced/Accessibility settings.

Holding everything together is the body of machined, anodized aluminum. It’s reasonably slim, and with fluid design flair, meeting perfectly with the screen on the other side of an unobtrusive piano hinge that flows well with the design chi’i. The opening of the Pixel is a wave indentation that allows you to ease it open. The strong piano hinge is a sensible body design move. There were reports of several testers in the original CR-48 pilot program who had trouble with the screen literally unhinging itself — a casualty of the plasticky hinge that became unbolted, causing a slight upward migration of the screen from the lower body of the beta model. In any case, the Pixel’s screen is easily lifted, even with the use of just one finger. There is a sense of continuity about the design that is unfettered by screws and speaker holes — the stereo speakers are located beneath the keyboard.

One issue that I found is that the unit does tend to overheat after prolonged use of more than two hours at a time. The piano hinge acts as a heat sink, but it’s not nearly enough to completely cool the unit after long periods. The unibody construction does have a flaw with retaining heat generated by the CPU. Bill Detwiler at Tech Republic actually took a unit apart to see the fan inside the Pixel.

For connecting peripherals, the Pixel has two USB 2.0 ports (unfortunately not USB 3.0 ports), an SD/MMC card port, but only has a mini-display port instead of an HDMI connection port, although simple adapters can be used to connect HDMI and VGA displays.

Chrome OS User Interface and Apps
The UI of the CR-48, the hardware of Google’s Chrome pilot testing program, was very mono-functional, and had limited offerings for users in terms of manipulating windows and settings. The new Aura UI, launched April 2012 is nothing new. But it offers the ease of a windowed interface and easy access to settings such as network. Bluetooth, master volume and the Settings menu. Entering chrome://chrome-urls/ in the address bar will bring up Chrome’s shortcuts for accessing various settings.

One way to test the Chromebook Pixel is to deploy it in real-life situations and use some cloud applications as well as apps in the Chrome ecosystem in the school room and in the workplace. My son assisted me with the school part of testing, as the students in his high school already makes use of SkyDrive for student computing. He had connected to Moodle on the Pixel during his last period to check homework and assignments. Moodle is a web-based, open-source LMS (Learning Management System) used by many schools for classroom websites that allows students to connect remotely. After logging in, he opens a SkyDrive document and works on the assignment, but doesn’t complete it. At home, he connects to Moodle again and finishes the assigned work for his classes, previously accessed in SkyDrive. He captures some interesting information in Evernote, and also saves some sites to the Bookmarks that are synced to his Google account.

I log in to WordPress to update some work. I just got out of a meeting, and I’m on the road. I don’t have access to the press assets I need, so I download a folder with about nine JPG files. After making some corrections to the post, I access the Downloads folder and select the zip file. Chrome OS offers an Open option, which I click. One handy feature for me is that Chrome OS by default opens Drive whenever you save a file, and you can view (or copy over) your Drive files to and from the Downloads folder and see the contents of external drives you have attached.

Then I discover some additional files and their download URLs in an email. I access the Pixlr Editor app and use the Import Via URL option for one file. I can resize the image, and make any necessary edits, saving it to the hard drive. Then I simply upload to WordPress with no further edits needed. I can add additional files to Pixlr, resize and resave them as new files, then upload to WordPress again, as needed.

What about accessing FTP servers? I use Koding and ShiftEdit. Both apps can save your FTP server settings so you can quickly log in to the FTP server of your choice, download assets and close out. They are also powerful collaborative developer tools, for coding on the fly or for updating HTML or CSS or whatever code for your projects. While creating a post, I make mental notes of ideas, content issues, etc., and I make use of Diigo Web and Quick Note to make notes, highlight information, capture web pages and bookmark sites for further research.

Chrome OS also offers a variety of cloud-based music streaming options that many people currently use on standard PCs and mobile devices: Pandora, Slacker and Google Play. The sound quality via the Pixel’s speakers came through clear and strong. Contacting colleagues and friends is easily enabled in one interface in IMO, open in another tab.

Viability of Chrome OS As Cloud Platform
Before I can be accuse of being a Google apologist, please hear my caveats. Is Chrome OS a perfect ecosystem? Of course not. The Chrome Store is still adding more applications that better address the needs of content creators, journalists and creative types, but that is changing. I think that it’s fitting that the educational sector is driving the adoption of Chromebooks. U.S. education has not managed to keep up with the worldwide adoption of STEM-based learning, and innovations such as GBL (game-based learning) has just begun to gain currency in U.S. educator circles. In fact, U.S. students fall behind in learning assessment in mathematical and scientific disciplines. No small wonder why Chromebooks are being embraced as a viable, low coast alternatives for students to have their persistent workspace in the cloud. The Chromebooks from Acer and Samsung run from $199 to $279, a bargain given today’s prices for laptops and ultrabooks.