Box beefs up security and search for enterprise storage

With more software vendors fielding their own cloud storage capabilities, Box continues to beef up enterprise security and perks for its offering. New features include two-step authentication, company-wide search for admins, and content scanning, the company said. 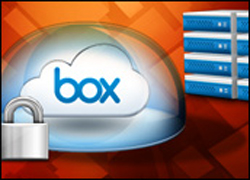 When it comes to cloud storage for the enterprise, security and manageability are key – for compliance reasons, IT departments need to know who is storing what.

That’s the impetus behind new features Box is rolling out this week and will showcase next week at its Boxworks event.

In short, the company is adding two-step authentication, company-wide file search, and content-scanning to the mix. In doing this, Box is upping the ante at a time when other, bigger vendors like Salesforce.com with Chatterbox and Microsoft with SkyDrive are adding their own cloud file-share and storage options. Box recently added new points-of-presence worldwide to speed up file uploads.

The company’s new native two-step authentication helps ensure that customers — on whatever device they’re using — are who they say are before gaining access to stored material.

Box already integrated with third-party single-sign on vendors like Ping, Okta and VMware, but this adds another layer of security, said Robin Daniels, VP of marketing for Los Altos, CA-based company. “If you have a mobile device, you get a one-time log-in code, so to get into your files you need to know your own pass code and you also need to own something that the system recognizes,” he said.

Box is also offering new tools to let admins search across all enterprise content by parameters including user, content type and date range. Box users could always search across their own files, but this is universal search — using Box’s own search technology — across all a company’s users.

“You can search across the whole organization for just video files that are saved in the last few days,” Daniels said.

And finally, Box is partnering with Proofpoint to scan file content for certain types of information before storing it. For example, if a user tries to store documents that include social security numbers or other data that could put the company’s compliance at risk, that content gets flagged for the admin and quarantined.

Vendors fight for their right to store your stuff

Box is one of several companies, including OwnCloud and Egnyte, trying to provide cloud storage that is both drop-dead easy for users — who otherwise won’t use it and placates security – and for regulation-conscious IT professionals.

And the competition seems to be getting fiercer. These companies all offer freemium services that they hope to convert to paid customers, but very few will detail just how many of their users actually pay.