The morning staff meetings at Explorys are called sprints. No one sits down. Software engineers and data scientists gather at a white board, busy with note cards, and discuss the issues of the moment. Scribbles on each card denote a question to be answered, a problem to be solved. One by one, team members pluck a card from the board, choosing their assignment, and head back to their workstations — maybe on a Razor scooter. New knowledge pours endlessly into Explorys and a youthful, tech-savvy staff races to absorb the possibilities. The same could be said of the company, which is helping propel the region into an emerging industry known as information analytics, or Big Data. 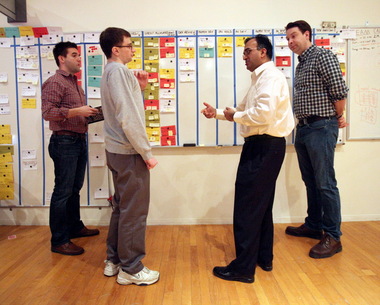 With innovative hospitals and strong universities, Cleveland had been seen as a likely player in the quest to make sense of the sea of data, much of it health-care related, generated by digital technology. But local entrepreneurs from different industries are showcasing the potential sooner than expected.

Spun out of the Cleveland Clinic three years ago, Explorys already employs 85 people searching and organizing health care data and the prospects are as bright as its hip new offices in University Circle. Suddenly, economic development specialists are eyeing Big Data, and its potential for Cleveland, with new intensity.

“Companies like Explorys are going to be big, and they’re showing us that Cleveland has a great opportunity,” said Tom Sudow, a vice president for business attraction at Team NEO.

As Explorys pushes the envelope in health care information technology, a handful of other area companies are beginning to mine enticing data veins.

With technology licensed from Kent State University, Streetsboro-based GraphSQL is pursuing graph-data analysis of massive databases, which could bring new strategies to the financial services industry.

For motivation, the founders have only to look to Explorys, where the staff hustles to keep up with the sweep of its home-grown technology.

In a field struggling to contain costs, and where decisions can mean life or death, the ability to “browse the crowd” and see what works best is widely considered a game changer.

“Size matters,” insists Dr. Anil Jain, a primary care doctor and a biomedical engineer. He invented Explorys’s search technology and left the Cleveland Clinic to put it to bigger use, teaming up with a pair of data-savvy local entrepreneurs.

“Does Drug A work better than Drug B? We have enough data to find out,” Jain said. “Our goal is to change healthcare as we know it. And that means creating and understanding new knowledge.”

Experts say the discoveries have only just begun.

“We’re generating more and more data every day. Most of it’s noise but often there’s a signal,” or useful knowledge, said Phil Simon, author of the upcoming book, Too Big to Ignore: The Business Case for Big Data. “Retailers, advertisers, NASA scientists, I really do think it’s going to effect everyone.”

There are limits to the usefulness of big data, Simon says. Not everything can be crowdsourced, and reading a spreadsheet will never replace human intuition, especially in medicine.

But innovations have led to an easily accessed technology that companies and industries of all sizes are eager to exploit, and that means opportunities and jobs.

Sudow and others think Northeast Ohio enjoys an edge in the emerging field.

As a center of health care innovation, the region creates plenty of data to mine. Meanwhile, area universities like Case Western Reserve, Carnegie Mellon and Ohio State produce the statisticians, engineers and health care information specialists the task requires, though not enough.

“Clearly, Explorys is at the heart of it right now, but there’s a ton of potential for Cleveland,” said James Weisman, a business strategist for BioEnterprise.

“My gut is that Cleveland is a new white space,” said Kendall Wouters, the chief executive of Reach Ventures and an experienced entrepreneur from San Diego. He plans to assemble a local team of about 12 this year to staff Socrates Analytics.

“The challenge is bringing talent into Cleveland and building teams around this technology,” he said.

“We’re excited about it,” he said. “An IT company tends to grow faster than a bioscience company.”

That’s not all that sets them apart.

Before it housed the Museum of Contemporary Art, or MOCA, the yellow-brick building on Carnegie Avenue was warehouse space for Sears. Explorys’s founders left the hardwood floors untouched when the company moved in three months ago, making it easier to ride scooters across an office that spans 25,000 square feet.

There’s a playful feel to the city’s fastest growing tech company, one that matches the youth and optimism of its niche. Explorys competes with the likes of Google and Amazon for search engine specialists. It recruits from Silicon Valley and from the East Coast and the Midwest with high wages — $60,000 to $90,000 for software engineers — and creative benefits.

The company’s “Ten Time” policy, for example, encourages employees to devote 10 percent of their paid time to an enriching hobby.

Not surprisingly, the sneakered staff skews young, which has caused some unexpected problems.

“Some of them go on business trips and can’t rent cars,” lamented company president Charlie Lougheed.

They also sometimes doodle on the glass wall of his office.

Still, a spirit of exploration has attracted talent from an array of disciplines. Ebony Johnson was the health information director at National College when she heard of Explorys. She’s now a data scientist working to standardize health care information for electronic searches.

Before, she believed her work affected hundreds of people, she said. Now she envisions millions.

Jason Gilder bears the job title of the era: director of infomatics. He leads a team of 14 people seeking to “net new knowledge” from the data that streams in from hospitals nationwide.

The 34 year old moved from Dayton, where he earned his doctorate in computer science from Wright State University and where he ran his own forensic DNA analysis firm. He took part in high-profile murder investigations in the U.S. and Europe. But he also witnessed the trial and error of his uncle’s cancer treatment.

“I thought, ‘Wouldn’t it be amazing if we had a database of all the people like my uncle who had cancer?” Gilder said. “This was exactly what I was looking for.”

Cleveland’s biggest Big Data effort began quietly a decade ago, as Jain sought better treatment programs for diabetics. He tapped the Cleveland Clinic’s database to expand his pool of patient records from a few dozen to a few hundred, but he knew there was more to know.

He suspected key insight lay in patient charts in other hospitals.

The multi-talented doctor designed an electronic search that cloaked a patient’s identity, which he knew was the key to getting hospitals to share medical records.

He thought his idea could transform health care, “but I didn’t know how to take it to the next level.”

Cleveland Clinic Innovations, which seeks to commercialize the work of Clinic researchers, knew what to do. It connected Jain to Lougheed and Steve McHale, who had brought data analysis to the cable television industry with Everstream, a local startup that sold for $15 million in 2005.

The pair heard Jain’s pitch and invested their own money to launch Explorys in October 2009.

“I liked the idea of doing Google-like searches in health care,” said McHale, the chief executive officer. “You don’t see that.”

“If you look at cloud computing and Big Data, there’s no better opportunity than health care,” said Lougheed, the company president and chief strategy officer. “A lot of good can happen.”

Entering its fourth year, Explorys counts as clients 13 major health care systems representing 120 hospitals nationwide. It requires its subscribers to share their medical records, so its database grows with customers.

With access to 19 million patient records, Explorys claims to hold one of the largest health care databases in the world.

Meanwhile, it expects its workforce to grow on, to 150 next year and maybe 300 the year after.

“We’ve exceeded every one of our projections,” said Lougheed, who sees lucrative applications to medical research and drug testing.

For now, the morning sprints are busy fielding queries from medical directors and doctors wondering if Explorys can gauge the impact of the flu vaccine in their community, or project the success of a cancer treatment for a certain kind of patient.

“I practiced medicine for 16 years,” he said later. “I still practice. But I can help a lot more people helping Steve and Charlie bring this technology across the nation. I can help millions instead of one.”