As the SaaS Industry Surges, Startups Look to Organize the Cloud

Services like Basecamp, MailChimp, Zendesk, Shopify, and Salesforce all have one thing in common: they rely on the cloud to store data and keep their users connected. For every large company leveraging the cloud, there are several startups looking to disrupt in the same way. While originally designed to streamline basic business operations like email marketing, project management and customer service, businesses are now experiencing cloud app overload. 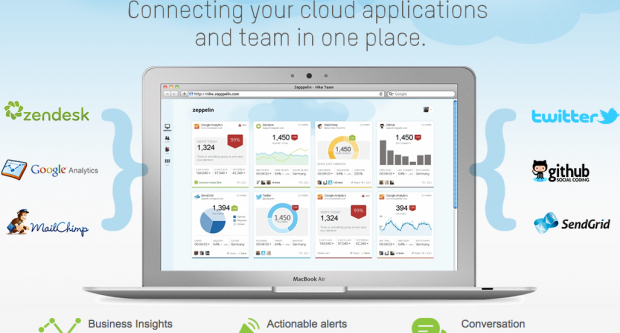 Switching between dozens of cloud-based apps and staying productive isn’t easy, especially when companies also have to keep up with their entire team’s activity too. Businesses need everything in one place and a new wave of startups, including Flowdock and Hojoki, have emerged to give businesses a way to organize their cloud-based apps, acting as one touchpoint for all cloud activity.

Founded in 2009, Helsinki-based Flowdock was one of the first startups to tackle the cloud overload issue. Led by Otto Hilska, Mikael Roos and Tuomas Silen, Flowdock raised $650,000 in funding in 2011 from investors including IDG Ventures and CrunchFund. They provide a team inbox and group messaging, letting global teams share their activity from cloud-based apps like Basecamp and Zendesk.

Similarly, German startup Hojoki aims to make managing the cloud easier by delivering push notifications from cloud-based apps, aggregating all of the team updates from services including Google Drive, Evernote, and Dropbox. Hojoki was just founded in 2011, and received $620,000 in seed funding from KIZOO last year. BetaKit covered the company in April 2012, when it released its mobile apps to aggregate activity streams.

One shift in the market is that rather than just aggregating cloud-based activity, startups are beginning to focus on the actionable data that all of these cloud apps are holding. Instead of merely keeping cloud app activity feeds in one place, startups like Geckoboard and Zeppelin want to keep cloud app analytics in one place.

London-based Geckoboard was founded in 2010, and by 2011, they had raised $300,000 in seed funding from 500 Startups and Index Ventures, with another $1.5 million added in September 2012 from the same investors. Founders Paul Joyce and Rob Hudson want to give businesses real-time data from all of their cloud-based apps in one dashboard.

In September, BetaKit covered Geckoboard’s developer platform, with the company opening up integrations so anyone could add their service to hook into the dashboard. The company had over 30 partner integrations as of September with services including Google Analytics, Twitter, Salesforce, and Basecamp, and they count Groupon and Atlassian as customers.

“Unlike dashboards, Zeppelin doesn’t display data – it displays information. Information that helps people in the company see how their business is performing. Zeppelin aims to start meaningful conversations when they matter most. It merges business intelligence and collaboration to help your team be more productive,” said Zeppelin co-founder and COO Anze Vodovnik in an interview.

“Studies show that over 70 percent of companies require technology that enables their staff to work anywhere, at any time. By outsourcing overhead involved with development, managing and supporting these applications, businesses can actually focus on running their business,” he added.

Organizing the cloud is a B2B market, making pricing plans and freemiums the norm in terms of monetization. Still in public beta, Hojoki is giving away all of their features for free. After official release, they’ll look to move to the freemium model. While Geckoboard and Flowdock offer free 30-day trials, users can expect to pay between $19 per month and $199 per month, depending on the number of users and connected services.