“I find it really hard to believe that we cannot collectively beat a company that sells books,” said Carl Eschenbach, the chief operating officer of VMWare, at the company’s recent annual confab with its partners and resellers. VMWare competes with Amazon to provide businesses with computing and IT services in the cloud and—I’m sorry to say to Eschenbach—he might soon have to suspend his disbelief. 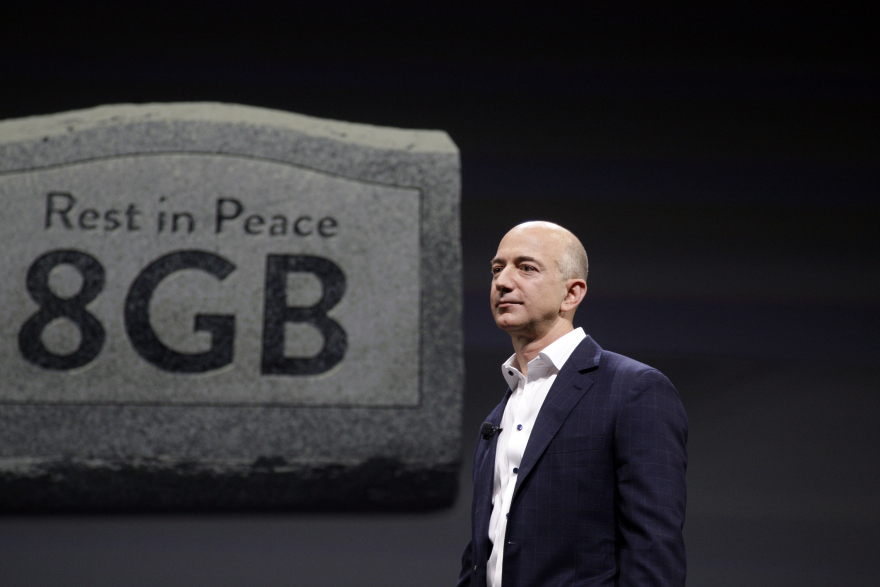 The problem for Amazon’s competitors, as always, is that Amazon is headed by a CEO who is perfectly happy not to make any profit on the goods he sells. The Street loves Amazon anyway because analysts believe in Jeff Bezos’s larger vision, which is that the internet is still (still!) in its nascent stages, and what matters is grabbing as much market share as possible while sucking all the air out of the room so your competitors suffocate and, some day, you are the biggest retail/media/cloud company on the planet.

As evidenced by Eschenbach’s comments, Amazon’s competitors in cloud computing are in denial about how well Amazon’s strategy of being the lowest price provider will work in a space as high tech, and high stakes, as cloud computing. Delivering books is not the same thing as guaranteeing that a Fortune 500 company’s most critical IT systems are always available, they say. Amazon’s cloud is unreliable, they observe.

But this is a fundamental misreading of Amazon’s long-term cloud strategy and the process of disruption itself. Disruption, as seven-year Amazon veteran Eugene Wei (and current head of product at Flipboard) writes in an astute essay on how Amazon works, usually starts with a company occupying the lowest cost, lowest quality part of a market.

That’s precisely what Amazon is doing now: Offering cloud services at rock-bottom prices. Startups love it, and everyone from location-based social network Foursquare to document sharing site Scribd uses Amazon’s web services (AWS). Even pre-web companies are on AWS, like Tickemaster, and established web businesses, like Yelp. Sure, the reliability could use some work. But my own sources indicate that one reason Amazon cloud outages take out the websites of the companies that use them is that those companies have not set up adequate backup and fail-over procedures. In other words, companies use Amazon’s web services knowing they’re taking a risk, because it’s quick and inexpensive and they’re willing to gamble rather than spend more to guarantee their services will never go down.

Moving up the value chain

It’s clear that Amazon doesn’t plan on being the low-quality service provider forever. The company’s latest quarterly report highlighted a raft of enhancements to the company’s cloud services, including:

That last one, CloudHSM, is the most telling of all. Making Amazon’s cloud “compliant” with data security requirements means that heavyweights like financial services firms and health care companies could start using Amazon’s web services and know they’re on solid ground in terms of both preventing data leaks and complying with the law.

The investment behind these rollouts is substantial. Amazon’s annual expenditure on capital goods has grown at a rate of 68% over the past five years, or 17 times faster than the average S&P 500 company.

Parsing the company’s quarterly report reveals that Amazon probably made $600 million in revenue last quarter on its web services, and that could grow to a total of $3.8 billion a year by the end of 2013, giving Amazon’s web services an estimated valuation of $19 billion, were it a standalone company.

Amazon’s competitors think customers are using Amazon’s cloud “to experiment,” said Jason Mendenhall, the vice president for cloud at Switch Communications, which runs one of the biggest facilities on the planet to host the computers that power the cloud. But already the interface for connecting to Amazon’s cloud is becoming a sort of de facto standard in the cloud community, because so many programmers know it. And with the growth of startups that started on Amazon, how long will it be until the “low end” cloud provider is creeping further and further up the value chain, just as “cheap” Japanese automobiles did in the US after their first, humble introduction in the 1950s?

Meanwhile, as Amazon noted in its quarterly report, Amazon web services “has lowered prices 31 times since it launched in 2006, including seven price reductions so far in 2013.” In a world in which consumers are grabbing more data from the internet than ever, the cloud services that many companies rely on are an ever larger part of their budgets. In that context, Amazon’s low price guarantee may be too compelling for even large enterprises to pass up.