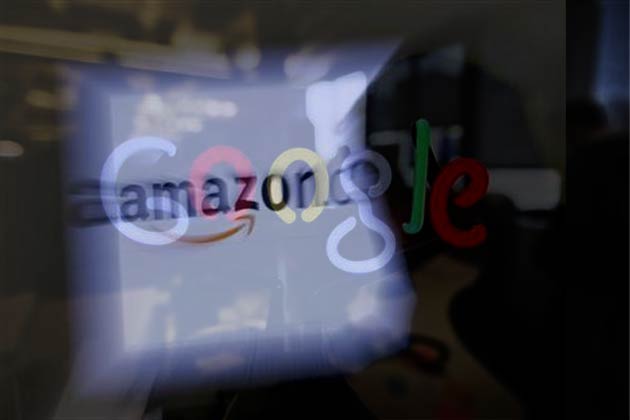 The news was a “wake-up” call to Bezos, an early investor in Google. He saw it as a warning that the Web search engine could encroach upon his online retail empire, according to a former Amazon executive.

“He realized that scanning catalogs was interesting for Google, but the real win for Google would be to get all the books scanned and digitized” and then sell electronic editions, the former executive said.

Thus began a rivalry that will escalate in 2013 as the two companies’ areas of rivalry grow, spanning online advertising and retail to mobile gadgets and cloud computing.

It could upend the last remaining areas of cooperation between the two companies. For instance, Amazon’s decision to use a stripped down version of Google’s Android system in its new Kindle Fire tablet, coupled with Google’s ambitious plans for its Motorola mobile devices unit, will only add to tensions.

The confrontation marks the latest front in a tech industry war in which many combatants are crowding onto each others’ turf. Lurking in the shadows for both Google and Amazon is Facebook with its own search and advertising ambitions.

Both companies have a lot at stake. Google’s market capitalization of $235 billion is about double Amazon’s, largely because Google makes massive net earnings, expected by analysts to be $13.2 billion this year, based on a huge 32 percent net profit margin, according to Thomson Reuters I/B/E/S. By contrast, Amazon is seen reporting a small loss this year.

Amazon shareholders have been patient as the company has invested for growth but it will have to start producing strong earnings at some stage – more likely if it grows in higher margin areas such as advertising. Google’s share price, on the other hand, is vulnerable to signs of slowing margin growth.

Not long after Bezos learned of Google’s catalog plans, Amazon began scanning books and providing searchable digital excerpts. Its Kindle e-reader, launched a few years later, owes much of its inspiration to the catalog news, the executive said.

Amazon’s fledgling ad business is still a fraction of Google’s, with Robert W. Baird & Co. estimating Amazon is on track to generate about $500 million in annual advertising revenue – tiny, given it recorded $48 billion of overall revenue in 2011. By contrast, 96 percent of Google’s $38 billion in 2011 sales came from advertising.

But Amazon’s newly developed “DSP” technology, which taps into the company’s vast store of consumer purchase history to help marketers target ads at specific groups of people on Amazon.com and on other websites, could change all that.

“From a client’s perspective, the data that Amazon owns is actually better than what Google has,” said Mark Grether, the chief operating officer of Xaxis, an audience buying company that works with major advertisers. “They know what you just bought, and they also know what you are right now trying to buy.”

Amazon is discussing a partnership with Xaxis in which the company would help Amazon sell ads for the service, Grether noted.

Amazon did not respond to an email seeking a comment.

Amazon can bring in higher-margin revenue by selling advertising than it can from its retail operations. By showing ads for products that it may not actually sell on its own website, Amazon establishes itself as a starting point for consumers looking to buy something on the Web.

Research firm Forrester reported that 30 percent of U.S. online shoppers in the third quarter began researching their purchase on Amazon.com, compared with 13 percent who started on a search engine such as Google – a reversal from two years earlier when search engines were more popular starting points.

Amazon now sells ads that show up to the side of product search results on its website. There were 6.7 billion display ad impressions on Amazon.com in the third quarter, more than triple the number in the same period of 2011, according to comScore.

Partly in response, Google recently revamped its product search service, Google Shopping, by charging retailers and other online sellers a fee to be listed in results.

Founded four years apart in the late 1990s, Bezos has long worried about Amazon’s reliance on Google for traffic, according to people close to the company, while also being dubious about Google’s high market valuation.

“He’d say: ‘This is the first time in the history of the world where the map maker is worth more than the territory that it’s mapping,'” recalled the former Amazon executive of Bezos‘ comments about Google’s popular online mapping service.

Google’s Android system is thriving but still has not cracked the nut of how to make money from mobile search ads and sales of digital goods like games, apps, music and video.

“If they can figure out mobile ads, that would truly be Google’s second act,” said Forrester analyst Sucharita Mulpuru.

But Amazon launched a broadside against Google in 2011 with the creation of its own version of Android for its Kindle Fire tablets that replaces key Google money-making services, such as a digital music and application storefront, with its own.

Not unlike Apple, “Amazon wants to control the experience on their devices,” said Oren Etzioni, a University of Washington computer science professor. “That doesn’t make Google happy.” The two are also clashing in cloud computing software.

Amazon started its cloud business more than six years ago, providing data storage, computing power and other technology services from remote locations. Google only launched its cloud computing business this year, but the market is growing so quickly there is still room to grab share, Etzioni said.

“I would not write Google off,” he added. “Amazon has the early lead but it’s very early.”

Google recently acquired BufferBox, a company with a network of lockers that shoppers can use to receive packages. It is also testing same-day delivery in San Francisco, hinting at growing interest in a larger role in online retail.

It is not talking about its full plans for retail, but some analysts think features such as same-day delivery or “pick-up” lockers, are valuable features it can use to enhance its existing online ad business. An ad for shoes, for example, might also make the shoes available for pick-up in a locker nearby, said Needham & Co analyst Kerry Rice.

If Google can own the search and the delivery, it will be able to provide the same experience as Amazon, with no inventory – “a higher margin, more efficient model,” Chien said.

Earlier this year, Google launched a new certification service highlighting merchants that ship quickly and reliably and backing it with up to $1,000 in “purchase protection.” Google could create a database of products and send shoppers to a page that has a way to buy quickly through the company’s payments service Google Wallet, Forrester’s Mulpuru said.

Google could then send that transaction to the retailer who would ship the product to the consumer. That ability is critical, according to Schachter, who said if consumers lack the ability to purchase items through Google it will lag Amazon and eBay Inc.