Another year has ended and it’s time to make some wild yet educated guesses as to how cloud computing will fare this year. I’m not expecting a lot of breakthroughs, rather I think there would be a lot of incremental improvements and a noticeable increase in adoption rate, be it intentional or not. What I meant by that is that the usual “Tom, Dick, or Harry” who is not in any way informed in the dealings of our little industry will not actually know that they are using services and tools being delivered to them by cloud computing. This will be the result of services like Dropbox, Box, Phanfare, iTunes, and SugarSync to name a few that are actively pushing their names to the masses through social media. 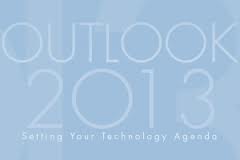 As my first prediction, cloud storage services like the ones mentioned above will become commonplace with the masses, especially those that specialize in picture syncing. As internet connectivity becomes commonplace, more and more people will be using online storage to store important files like schoolwork and work-related files; no longer will be plagued by corrupted files on our flash drives, or forgetting them entirely. This is a big assurance that the files will be available anywhere in the world.

Second, I am hoping that this year will be the year that cloud computing will have its “standards” published. Many of the technologies that we use everyday have governing bodies that update the standards of these technologies, ones like HTML, USB, and wireless data communication (802.xx) standards come to mind. Sure, each of the technologies being used in cloud computing has their own standards, but the paradigm itself, the whole of cloud computing has none, an apparent bar to adoption for some organizations. This is also the reason why there are so many ad-hoc standards popping up, based only on popularity. This will surely be a heated issue in 2013 with most companies choosing one side or the other, the winner apparently takes all. Remember the Blu-ray vs. HD DVD war a few years back?

Third, Big Data will be the big name this year as more and more people dump their data on the cloud. It is a complex term and I won’t explain it here anymore because chances are, you have already heard of it and might be quite familiar, if we are in the same industry that is. Well essentially, all the data in the world is exponentially gaining mass because of this and it could only lead to services and applications being made around this data.

There are so much more to expect in 2013 but I am only allowed little space, so maybe we can talk about each of these sometime. Here are some terms that you should look out for this year, they will probably make a lot of headlines: Cloud Certification for professionals, CloudStack vs OpenStack, cloud services (like IaaS, Paas, and DaaS), Bring Your Own Device.